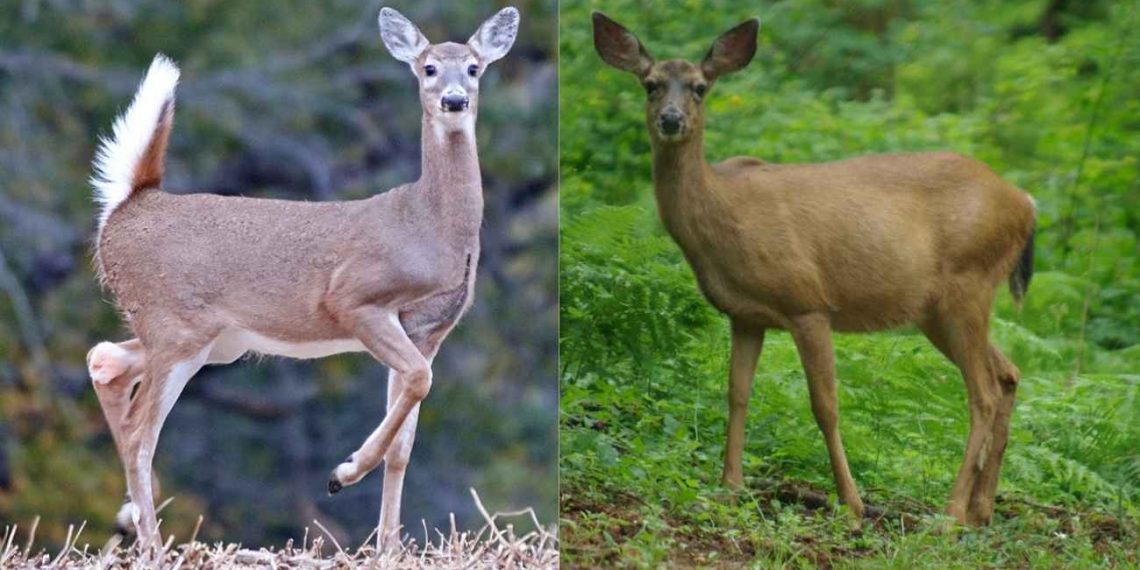 Black-tailed deer and mule deer share a closer bloodline and share personality traits, such as hopping up the side of mountains to escape predators, whereas whitetail will simply bolt downhill, usually in search of water.

Black-tailed deer are descendants of whitetail, the latter of which has walked the landscape of North America for roughly 3.5 million years. Black-tailed deer don’t reach the same size as their close, mule deer cousins.

Their range is vastly different as well. Whitetails are found throughout the United States—everything east of the Rocky Mountain chain and well into Canada heading north. Black-tailed deer primarily range in Britain Columbia and Alaska.

Key Characteristics of Each

Though both are descendants of whitetail, black-tailed deer are considered a “sub-species” of mule deer. There is no speculation with whitetail. A whitetail is a whitetail, and there is nothing else like it.

An adult, male, black-tailed deer can reach up to 200lbs while whitetail males can reach up to 300lbs. Whitetails are subject to a different phenomenon than blacktails, which is Bergmann’s Rule.

The rule is pretty straightforward—species that live farthest from the equator grow larger than species living closer to the equator. Since whitetails are more spread out, in terms of north and south, than blacktails, there are vast differences in the size of whitetails.

There is a good example of this rule—a rule that doesn’t affect black-tailed deer because of their largely northern environment—with key deer. Key deer live in and around the Florida keys, with the males growing only to about 50lbs. Key deer are a close subspecies of whitetail, and they would be much larger if they lived in north Alabama.

Most black-tails live in British Columbia and Alaska, far to the north. Their size diversity isn’t much diversity at all, with most adult males reaching 200 to 205lbs.

From a distance, their antlers seem similar, but on close inspection, there is a distinct difference. A black-tailed deer’s antlers will branch from the main beam. Whitetail tines all grow off a single, primary beam. Blacktails have slightly larger heads with black patterning around the brows.

Whitetails have smaller, more streamlined heads with white around the eyes. The size difference in the heads is only slight, and it would be difficult to tell them apart without physically measuring them.

Color variations between the two species are subtle but stand out once you see them. For instance, a black-tailed deer typically has a lot of black shading on the brows which are notably absent on the whitetail. Neither species has to flick their tails up to notice the difference either.

Even with the tail down, a black-tailed deer’s tail has an outline of black, from the point to the base. Whitetail deer have standard-looking tails, with glaringly bright white when they are alert and flick their tails up.

Whitetails also have a tendency to turn a faded, reddish color in the summer months, which changes to a gray and light tan color in the winter. This color variation doesn’t occur in black-tailed deer.

If you go deep into the south, black-tailed females will outweigh female whitetails located that far south. Of course, Bergmann’s Rule makes plenty of sense when you think about colder climates versus warmer climates. Deer in the north have to have thicker hiders and fat layers to resist the chill.

Though both species are related to one another (black-tailed deer being the offshoot progeny of whitetail), several, subtle differences set them apart. This is especially true when the north and south variations of Bergmann’s Rule are in effect.

Black-tailed deer failed to retain the size of their parent species of mule deer, instead becoming the smallest—in general terms—of the deer populations existing on the continent. Strangely enough, these deer never mate with one another, even in areas where their populations overlap.