Difference Between Flounder and Halibut 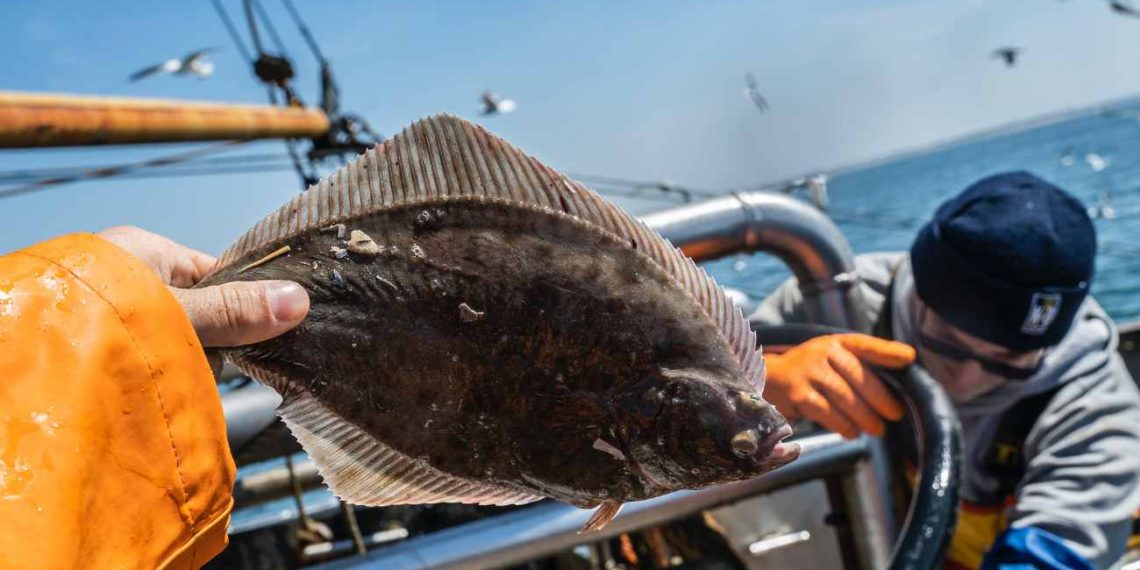 Halibut and Flounder both belong to the same flatfish family of fish, and both have their eyes located on one side of their heads. While Flounder is more of a generalization of flatfish, Halibut is a specific species of Flounder.

The primary difference with flounder vs halibut is the size. Halibut are much larger than Flounder. Both species of fish are more than welcome at the dinner table, but Flounder is a multitude of different flatfish species, all of which are pretty good eating.

Just to be clear, Flounder includes Halibut, Turbot, Sole, Plaice, and Pacific Dover Sole. There are more than that as well, but for the purpose of this writing, it’s all Halibut versus southern Flounder species.

Difference between Flounder and Halibut

Typically, Flounder are smaller than their Halibut cousins. Halibut is also a northern fish, with a little intermingling between the two species in the middle coastal states, and it’s all Flounder down in the south.

The differences between a typical Flounder and a Halibut are even more extensive than size and habitat, however.

Although Halibut are actually Flounder, the Halibut species is divided into three—Greenland (black) Halibut, Atlantic Halibut, and Pacific Halibut. Flounder, on the other hand, include a wide variety of flatfish but mainly the ones listed above.

Where to Find them

Typical-sized Flounder are found in the south and up to the southern coasts of California and North Carolina. Halibut are found farther to the north on either coast. Halibut are also f in the Arctic Ocean, but the largest Halibut are in the northernmost areas of the Atlantic Ocean.

More traditional species of Flounder are found midway down the United States, but they truly thrive in the Gulf of Mexico and off the Atlantic coast of Florida.

If you’ve never been Flounder gigging before, there is nothing quite like a quiet night on the shoreline in some bay fed from the Gulf of Mexico. You can take home your fill and have tired muscles in the morning.

Neither fish is going to break any speed records under the waves anytime soon. They say that Michael Phelps is faster than a Flounder since he can swim up to 6mph. Unfortunately, Flounder can get up and move pretty fast, but their speed is around a mile or two per hour, and that’s all.

Halibut are in the same boat (pun intended) and can only swim a couple of mph faster than standard Flounder at best.

Best way to catch them

Flounder gigging is one of the best ways to catch more traditional Flounder species. You have to go when the weather cools and Flounder move up close to the shoreline. With a little john boat and some floodlights, you can pole your way down the edge of the shoreline, observing the substrate beneath the water.

Whenever you see the vague outline of a Flounder, stick it with your spear. Other than that, Flounder are bottom feeders, and live bait rigged to stay low in the water is a good choice. Fishing for Halibut is a different proposition. Alaskans like to use chum bags to lure them up off the sea floor.

They use salmon or herring live baits set up to hover midway up the water column, usually about 15 to 20 feet off the sea floor.

How do they Hunt

Halibut and Flounder (since they are essentially the same) share similar hunting traits, burying themselves in a fine layer of sand at the bottom and striking unsuspecting fish as they swim by.

However, Halibut will come up for something that really strikes its interest, and they’ve been known to swallow salmon whole.

The law of fish sizes points to smaller Flounder species. In general terms, the larger the fish, the less flavorful it is. While Halibut is good, it loses out on some of that flavor when it gets really big.

Flounder have flakier, more delicate, and flavorful meat. They are often a better substitute for Tilapia, especially for dishes like fish tacos. Halibut shares a very similar taste to Flounder. The only major difference is Halibut can get a lot tougher, and you have to know what you’re doing to soften the meat up when you cook it.

The reality is, Halibut is just another name for a specific species of Flounder. People are often driven to compare them with two clear pictures in their minds—one of the giant Halibut and one of the football-size Flounder.

That’s perfectly fine because that is essentially the comparison we made here. However, if you’re looking for the taste of Flounder at your dinner table, you probably wouldn’t recognize the difference between Halibut and Flounder, so long as both were cooked right.

Without a sense of scale, most people would probably have trouble differentiating between a picture of a Halibut and one of a Flounder. But, so long as there is a difference in the minds of most anglers, there’s a comparison to be made.