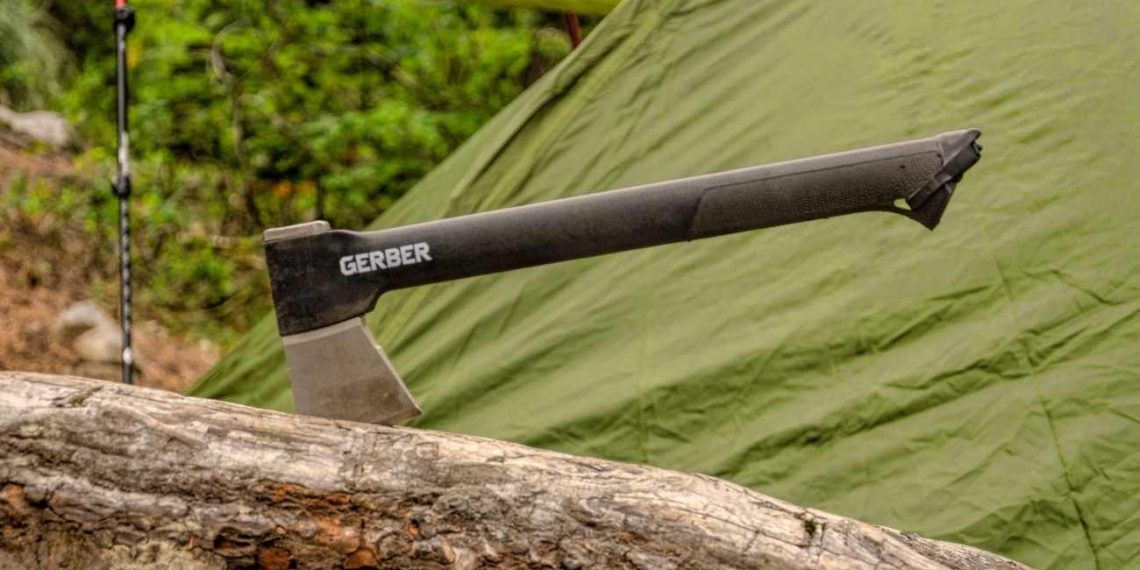 The tomahawk is the ancient predecessor of the hatchet, long ago wielded in the days when indigenous Native Americans and Neolithic stone tools. The concept of the tomahawk is mostly imagined as a tool right out of a western movie, but its history is far more ancient.

It’s also important to differentiate between the modern vision of the tomahawk and its true forms, as there is a variety of them. A tomahawk is not a singular weapon type and it maintains its defining characteristics whether the striking end is a rounded stone or a steel cutting edge.

The hatchet is closer to a tool than a weapon. It’s generally shorter and used as a domestic tool for construction and wood-chopping purposes. However, the modern audience may be confused over the hatchet vs tomahawk comparison, so let’s dig a little deeper into both.

The tomahawk is generally considered to be a weapon of destruction. The original versions were basically clubs with great, round rocks on one end. European settlers would eventually introduce natives to iron and steel, changing the trajectory of the tomahawk forever. 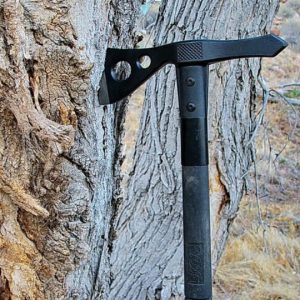 As devastating as a tomahawk is on the battlefield—even in its original stone form—it remains simple in design and function. Since tomahawks differed, depending on the tribe, the shaft might be one foot or up to three feet in length. Today, they have more distinct and all-encompassing features.

Before European arrival on the shores of North America, Native American tomahawks were typically long-shafted, with leather straps used to bind rounded, heavy stones on the end, making it more like a mace than a hatchet.

Now, tomahawks might have a single edge, double edge, or include a spike opposite of the cutting edge. The cutting edge is razor sharp and tapered on the end, typically 4” in length. The modern tomahawk handle is between 18” and 22” in length.

The cutting edge, as mentioned above, is about 4” in length and razor-sharp with a very thin edge. They are usually very lightweight and some contain a spike, hammer, or double edge on the opposite end.

The handle is usually rounded, lengthy, and made of wood. None of that crazy, “stealth tactical” stuff that’s absolutely meaningless outside of marketing purposes. Occasionally, some manufacturer or another will come along and add a spike at the bottom of the handle. 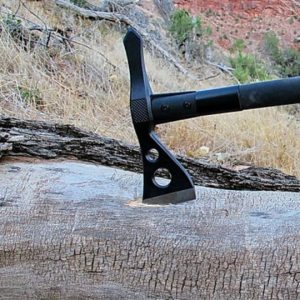 The cutting edge on a tomahawk is just like any other. It’s only as sharp as you maintain it. The standard length of the cutting edge is 4”. However, you can make your own tomahawk using stone, whether it’s rounded or the stone is shattered and sharpened on the edge.

Size and weight vary but the handle is usually 18” to 22” but is still classified as a tomahawk even if it’s much longer. Tomahawks may be larger than hatchets but they are traditionally lighter in weight. This is mostly because of the light wood handle and the smaller head.

Nowadays, you can’t paint your face, join a warband, and go screaming after people with a tomahawk. So, it’s mostly used for many of the same things hatchets are used for, including chopping wood, hammering in nails, driving stakes in the ground for tents, and similar activities. 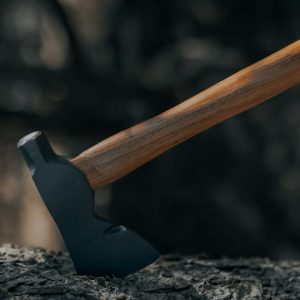 While a hatchet is perfectly well suited for hand-to-hand self-defense, it’s mostly used as a tool before anything else. Hatchets are the perfect tools for hiking, backpacking, camping, fishing, brush clearing, and more.

Hatchets are the smallest of the available chopping instruments out there. Like tomahawks, they come in several varieties, including double edges, hammers, and picks on the end opposite the edge.

It’s difficult to narrow down a specific design for hatchets because some of them can be small enough to put in your front pocket. Hatchets aren’t usually as big as a tomahawk but, in general, they have decent heft to them. Hatchets are also designed to be an exceptional survival tool.

Unlike a tomahawk, a hatchet’s head is thicker and wedge-shaped. While the tomahawk is designed as a weapon, hatchets are supposed to be tools, and the heads are heavier, with their wedge shape for chopping wood.

Hatchet handles are ergonomically curved, short, and designed for specific hand placement. There are hatchets out there with wooden handles, but it’s rare to see them nowadays. With the “tactical” marketing angle becoming more popular, the handles are more often metal or fiberglass. 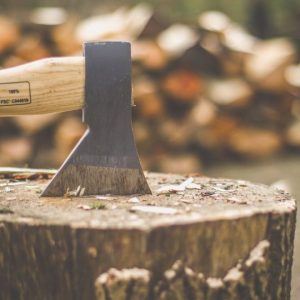 The cutting edge of a hatchet is sharp but nothing like a good buck knife. It’s sharp in the way that an axe is sharp. In other words, the edge is narrow enough to chop firewood but not to cut sheets of paper with finesse.

Tomahawks are generally longer than hatchet but often much lighter. Although hatchets are smaller, they’re tougher, with more heft and evenly distributed weight. Hatchets are also sturdy. As chopping tools, a bit of sturdiness is required.

Hatchets are smaller, have more heft, and are designed to chop, rather than cut. You won’t be cutting down oak trees with a hatchet, but it’s more than capable of cutting saplings, bushes, and small limbs.

How to tell the difference

It’s pretty easy to see the differences between the two, even if you’re not a hatchet or tomahawk aficionado. Tomahawks are generally larger and have razor-sharp, narrow, cutting heads.

With tactical marketing, hatchets often mimic the tomahawk but are almost always smaller. Despite how large a tomahawk is, it’s still lighter than a hatchet (for the most part). Hatchets have more wedge-shaped heads that are generally larger and designed for splitting wood.

If you are looking for a multi-tool for camping, backpacking, hiking, or other outdoor activities, a hatchet is a perfect instrument for all of the above. A tomahawk can do some of the things a hatchet can do, just not as well.

Tomahawks are more of a self-defense weapon, especially with the popularity of “tactical” versions, which usually just means it’s painted black and uses a lot of fiberglass material. The same goes for a hatchet.

The only drawback of a tomahawk is its size. They are generally long enough that it’s difficult to throw in a lightweight hiking backpack. Hatchets are more versatile and easy to stow away but lack the stopping and defensive power of a tomahawk.